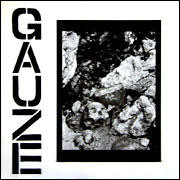 Hardcore punk band from Japan, who formed in Fall 1981.

This bootleg LP is a partial Gauze discography, containg the entire "Equalizing Distort" LP as well as their compilation tracks from the "Thrash Till Death" and "A Farewell To Arms" LP releases. It comes with an insert that has the song lyrics in English and Japanese and cover scans of the original releases featured on this record.

Tracks A1-A10 are from the "Equalizing Distort" LP.

Tracks B1-B5 are from the "Thrash Till Death" compilation LP.

Tracks B6-B9 are from the "A Farewell To Arms" compilation LP.