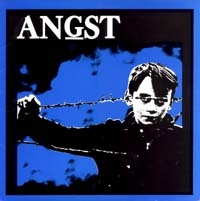 Angst was formed in 1979 in Denver, Colorado, with the original name The Instants. With the punk scene virtually non-existent in Denver at that time, they briefly moved to the UK before finally relocating in San Francisco and taking the name Angst. They signed with with SST Records and released five albums throughout the 1980s.