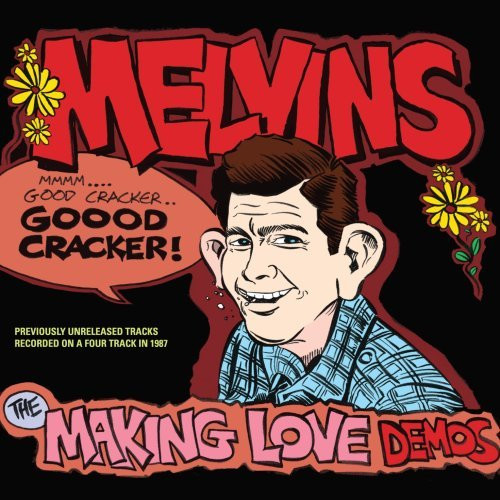 (the) Melvins are a prolific rock/metal band originally formed in 1983 in Aberdeen, WA, relocating to San Francisco, CA in 1988, and eventually settling in Los Angeles' San Fernando Valley. The core members are Roger "Buzz" Osborne aka King Buzzo (guitar/lead vocals) and Dale Crover (drums/vocals and bass on some releases). Throughout their 30+ years career they have had a rotating cast of more than 10 bass players and have released more than 20 studio albums. Their current bassist is Steven McDonald. They perform under the name "Melvins Lite" with Trevor Dunn on stand-up bass and under the name "Melvins 1983" with Dale on bass instead of drums, in reference to the early incarnation of the band circa 1983 before Dale played the drums in the band. The name Melvins came from a grocery clerk at the Thriftway in Montesano where King Buzzo served as clerk and vandal. Melvin was the most hated fellow employee and they felt it to be an appropriately ridiculous name.

Released bundled with Brian Walsby's "Manchild 3" fullsized comicbook and is limited to 2000 copies.
CD is housed in a cardboard sleeve.

Previously unreleased tracks. Recorded on a four track in 1987. Mastered 2007.

Statement from the label:
"The Making Love Demos is a collection of 8 unreleased tracks recorded by the band in 1987. While the original master tapes have long since disappeared, It just so happens that Mr. Walsby was given a copy of this recording back in ‘88 and held onto it just for this very moment. We’ve had the whole thing mastered and tweaked for your listening/collecting pleasure. It’s still raw as hell, but we like it that way. Four of these songs were re-tooled and recorded for the Ozma record. Four of them exist only on this CD."