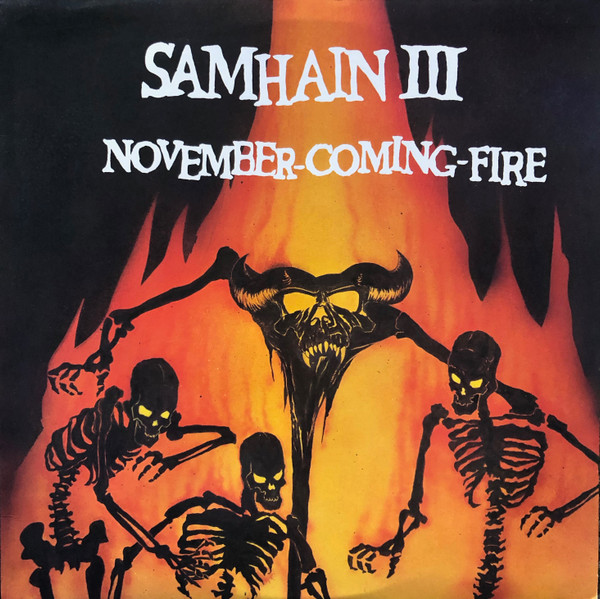 Samhain was formed in 1983 in Lodi, New Jersey, by vocalist Glenn Danzig and bassist Eerie Von following the breakup of The Misfits. The idea for Samhain, though, had allegedly been concieved a few years prior to that and a number of songs for the project were written while Danzig was still in the Misfits (the Misfits also recorded a few songs that Danzig had written with Samhain in mind). After tossing around several line-ups, the band was completed with Steve Zing, another Lodi native and former classmate of Von's, on drums. Danzig would also handle guitar duties, although former Minor Threat guitarist Lyle Preslar played with the band at their first show and recorded several songs with the band. Eschewing the straight up punk sound and horror movie image of the Misfits, Samhain played a more goth and atmospheric style of music with some punk and metal overtones and the lyrics focused more on the occult and real life violence. Following the recording, but prior to the release of their first album, 1984's "Initium", samhain_novembercomingfire.zip

First pressing with both Plan 9 and Caroline addresses and logos on sleeve. Included folded insert sheet with photo collage on one side and lyrics on the other.
Pressed on thick opaque vinyl (approx. 160gram).

EPD in deadwax is the logo for Europadisk, the company that plated the lacquers and made the original stampers. All subsequent US pressings have the EPD logo because it was stamped into the father plates, but only the first pressing was plated at EPD.

This version has a pressing flaw which causes a skip during the first track.