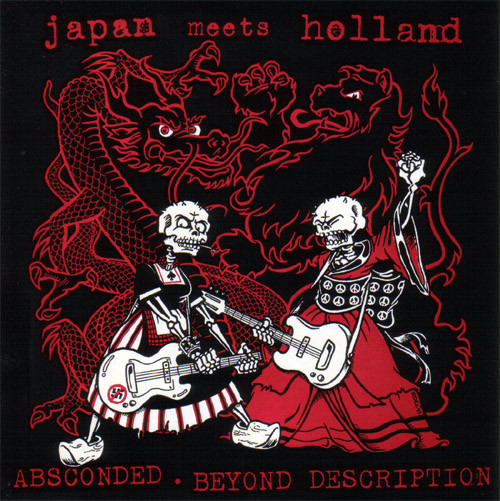 Absconded was formed in august 1991 in hometown Den Helder. Being part of a big circle of friends skateboarding, smoking pot and hanging out on the beach playing soccer and skimboarding, they listened to typical '80's punkrock music like the freeze, zero boys, white flag, rkl, angry samoans, bad religion, agent orange, circle jerks, descendents and the ramones (to name a few). While trying to play covers, they also started to write their own songs. After over twenty shows, they finally got the chance to play their first show outside their hometown in Parkhof, Alkmaar in december 1993. That's where they met up with famous Amsterdam punkrockers NRA, from whom the singer went so crazy when Absconded played 'bloodstains' from agent orange that he had to go to the hospital with major injuries. This was the beginning of a long-lasting friendship between the two bands. Together with NRA, Absconded played over 150 shows everywhere in Holland, including a European tour and a show at the Dynamo Open Air festival in 1995. Within 4 years, Absconded had managed to play with bands like SNFU, Supersuckers, Lagwagon, Strung Out, New Bomb Turks, No Fun At All, Down by Law and Burning Heads without even ever releasing something like a demotape! In 1995 Absconded did their first recordings which was released on Bits of Noise comp 2, on WRF records. Two songs were put on a split single together with a japanese band called Beyond Description, which was released on Wicked Witch label. In 1996 they (...)