I had a black and white copy of the The Sex Pistols File: 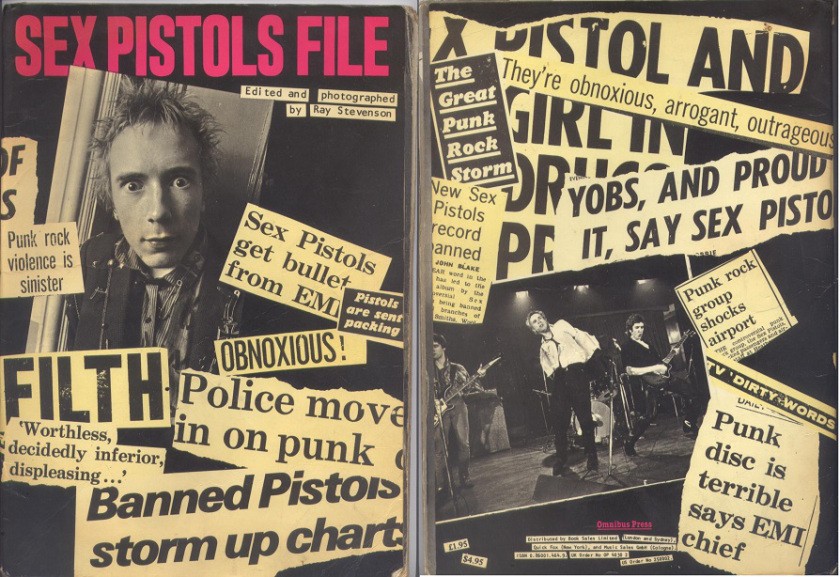 And in this one source of information available at the time on the group, there was a photo of the Anarchist shirt made by Vivienne Westwood and worn by Steve Jones. 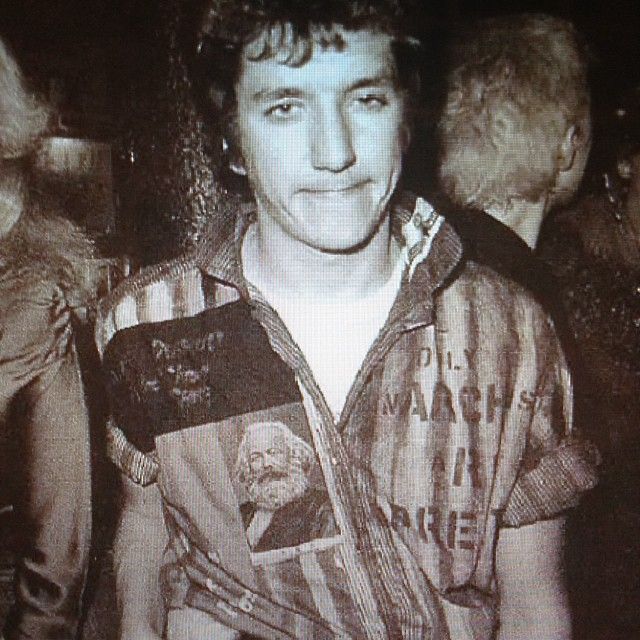 This shirt was amazing, and I decided to create my own. By using a workers jacket from my dad’s work place I started to add slogans and patches, which ment something to me at that time.

The jacket was cheap cotton, that the drivers of a local agricultural firm, used to deliver oil to the farmers. My dad got one for free. There was no lining, it was a basic single layer cotton jacket. It was not supposed to be fashionable or artistic, I did not take  a lot of time to “design” anything. The zips I bought at the local market or what were lying around the house, the studs were bought at the local market and  were more worn in leather jackets than soft cotton.

The back of the jacket was painted with emulsion, no fancy fabric paint ! The badges were bought from our local White Elephant shop, which I used to frequently go when I was walking the streets of Carlisle in the week days.

The back of the jacket originally had text, and underneath the 3 diamond sign, there can still be seen the lyric/slogan from The Angelic Upstarts song, “Police Killed Liddle Towers“. I probably thought this too much of a target for our local police, who would not take it too kindly, so I painted over the text (but still faintly seen today) and painted the 3 diamond sign, as seen on the front of The Clash’s 2nd Song Book 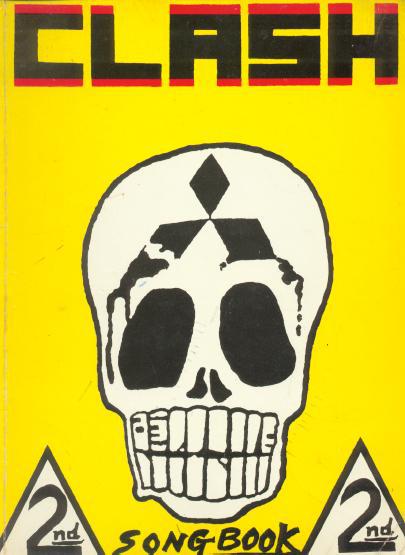 Also, on the back of the jacket (but also painted over) was text from the verse of the Sham 69’s song “Questions and Answers“. The text reads “As soon as we are born we are told what to say and do”. This was painted out and the name of my band at the time, “Frenzy” (see the page in this blog).

I used to cut the stencil out from newspaper and spray-can over it… D.I.Y.

On the back of the jacket there was a badge with an inverted royal crest. In those days, if you turned a symbol upside down, it meant you were against it… I then sew the words “Freedom” above the crest… “Freedom from the royal family”.

The same idea was used for the nazi emblems. nazi  badges was turned upside down and sewn onto my sleeve. In the 1980s the national front was popular and by wearing such things it left you open to attacks, I was anti-fascist and I wrote about such topics in my songs.

As The Sex Pistols had created an Anarchy shirt, I decided to put my political ideals onto this jacket. “I.B.S.” stood for the title of one of my songs (Independent British State) and below that “Federalism”. Through these 2 statements I tried to convey my wish for a break-up of the UK, into smaller, more ungovernable, counties. The same way the U.S.A. had federal states where laws for each state had precedence over another law in a different State, yet still have a loose federal law. I.B.S. was the equivalent. To break up the UK, not only in having a separate Scotland, England, Ireland and Wales; but dividing counties within those countries, and giving more control to the local governments and to the people within those counties.

“Pravda” was one of the first songs I had written, it was a Russian word meaning “Truth”. The content of the song was similar to the Sex Pistols “Anarchy in the UK”.

The “RAF” symbol did not mean I was a supporter of the Royal Air Force ! but I wore it as it had the initials “R.A.F.” which meant “Red Army Faction” a political activist organization, and which was supported by Joe Strummer in the film Rude Boy. It also meant the musical/political movement “Rock Against Racism” which was popular in the 1980s to counter-react the growing right-wing elements in pop music.

The front of the jacket had “Rebel Red” again mimicking a Clash slogan and the 5 pointed Star, mimicking the symbols the anti-nazi internees were forced to wear in the ghettos (Jews, Homosexuals, Gypsies, Communists, Anarchists etc), I got this idea from the 1st Clash song book.

On the shoulder there was a R.A.F. regiment badge, symbolizing the dual meaning. There used to be a piece of text, written onto a square piece of cloth and was safety-pinned on to the shoulder. The text was taken from a few quotes of the Anarchist Mickael Bakuinin’s writing.

This jacket if I remember correctly, was only worn twice. The first time it was worn to a gig at Carlisle’s Market Hall to see a punk band, possibly The Angelic Upstarts or Stiff Little Fingers, I can not really remember. The 2nd time was on a saturday afternoon: punks used to meet in the center of Carlisle and generally hang about. I remember having Bakuinin’s text pinned to my shoulder and people trying to read it… ! The afternoon past off ok, until it was time to walk home. A friend and I were walking past the cathedral and then we heard a voice behind us saying “you are running, aren’t you punks?” glancing behind we saw 2 Heavy Metal bikers coming after us, we did not hang around but ran for it. The problem was we had to run passed The Boardroom Pub which was the hangout for the biker gangs and Heavy Metal music lovers. As I mentioned above, these writings and slogans on ones jacket had reactions in the 1980s, it was a spark, and thats all was needed.

Back then a bike gang member had the “right” to go up to another Heavy Metal follower and demand his “cut-off” (his denim jacket), well they did not get mine !