Quiet Slang, a.k.a. Beach Slang’s James Alex, unveils We Were Babies & We Were Dirtbags EP: Stream

Track by Track is a recurring new music feature in which an artist offers a comprehensive rundown of their new album.

“Play it loud, play it fast” go the opening lyrics of “Future Mixtape For the Art Kids”, the song that kicks off not just Beach Slang’s 2016 album, Loud Bash of Teenage Feelings, but also this quartet of stripped down songs, a collection comprised of just cello, piano, and the vulnerable vocals of frontman James Alex. It’s striking to hear those words without a thundering chorus of guitars accompanying them, and, as such, they take on a different resonance. Rather than a call to action, it’s a plea to one’s own memory: “Please let me remember the rush.” He calls the project Quiet Slang.

“I suppose I’ve been thinking of things like this: Beach Slang is drunk, sweaty sins on a Saturday night. Quiet Slang is salvation on Sunday morning. Or maybe it’s about holding on. Something like that,” Alex told Riot Fest earlier this summer. Upon announcing the EP, he described the project as his way of finding “something that calms our bones.”

“Maybe this is some small slice of that,” he continued. “Maybe it’s not. Maybe it’s chaos in soft clothes. Maybe it’s frightened. Maybe it’s fearless. Maybe it’s both. Or maybe it’s nothing. I don’t know, but I think about this: one day I’m going to be dust. And when my soul splits, maybe this will be the thing that sneaks me through the gates. If not, well, those are the breaks.”

We Were Babies & We Were Dirtbags might seem a curious choice for such a loud band, or even a gimmick in the vein of those “Pop Goes Punk” releases from the early aughts, but Alex’s sweet, wistful lyrics have always been as tender as any folk songwriter. Because what he understands is that a tipsy makeout can sear itself into the soul as much as a marriage vow. Our loudest nights are often the ones we remember in the quiet of a lonely dusk. It’s why we romanticize bands like The Replacements and Big Star, both of whom Alex honors with covers on the EP.

This isn’t just a one-off project, either. Alex says an LP featuring “ten quiet versions of ten loud Slang songs” is on the way early next year. In the meantime, stream the We Were Babies & We Were Dirtbags EP and see Alex’s Track By Track breakdown of the album below. Get wistful by clicking play on the above video, and be sure to catch Beach Slang on their current headlining US tour.

“Future Mixtape For the Art Kids”
It’s strange and necessary how tender things hold so much more power. They swing differently. They find what matters. I don’t know. I mean, I just wanted to make something that shoved my dumb, little narrative forward, that shifted the weight of some things I’ve written. Most of the time, I’m caught in a tug-of-war between the gutter and the light, fighting to figure out where I fall. Look, all the best stuff is part-cracked and part-patched. The best humans are made the same. And that’s all this is—a love letter to all my friends who thought they were meant to die young. See?—we made it.

“Bad Art & Weirdo Ideas”
The whole idea of Quiet Slang came from the lyric, “Why do we keep shrieking when we mean soft things?” (Stephin Merritt, I hopelessly adore you.) The first time I heard that it seared me. And just never left. “Bad Art & Weirdo Ideas” was the first song I tried twisting into Quiet Slang. And it felt right, right away. I mean, for me, it was really about cracking the idea of minimalism, peeling away everything that didn’t contribute something significant. Every sound standing needed to matter. I mean, “discipline” is a real dirty word. But, if you rattle it properly, it shakes into grace.

“Androgynous”
Drunk pianos and really necessary words. No one’s ever going to come close to The Replacements. Ever.

“Thirteen”
I never thought I’d touch a Big Star song, because, I mean, why try, you know? But, bravado can be an antagonizer, a pusher—it’s good to get shoved sometimes. Land softly. “Thirteen” was the first song I ever remember hearing that made me miss some place I’ve never been. You know that feeling? Does that make sense? Either way, I hope I didn’t blow it.

We Were Babies & We Were Dirtbags EP Artwork: 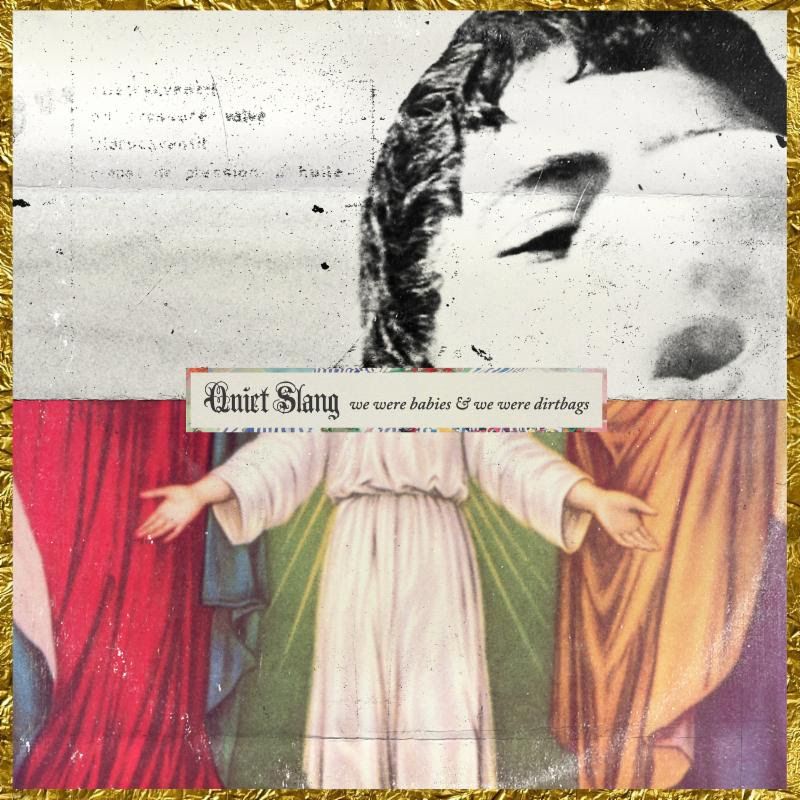 Melkbelly share the Origins of their new single and video, “Off The Lot”: Watch

Kevin Devine teams with The Mynabirds for stripped down version of “No One Says You Have To”: Stream