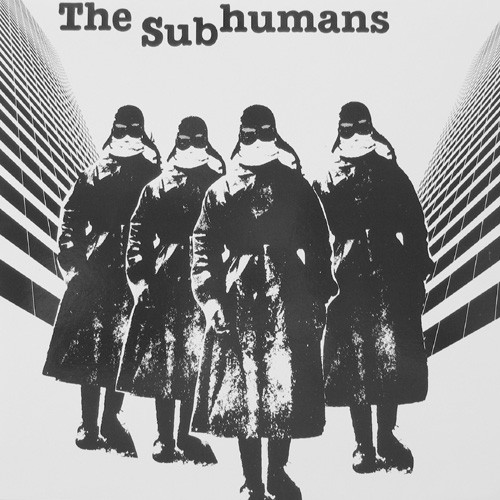 Canadian punk band from Vancouver, British Columbia formed in the Spring of 1978 and originally active until Fall 1982, later reuniting.
Not to be confused with the long-standing UK punk rock band, Subhumans.

The Subhumans were formed in 1978 by Brian "Wimpy Roy" Goble (vocals), Mike Graham (guitar), Gerry Hannah (bass) and Ken "Dimwit" Montgomery (drums). Shortly after their first single, Dimwit departed and was replaced by Koichi "Jim" Imagawa. The band released their first full-length, "Incorrect Thoughts" in 1980. Afterwards, Hannah and Imagawa departed and were replaced by Ron Allan (bass) and Randy Bowman (drums). The new lineup signed with SST Records and recorded the "No Wishes, No Prayers" LP in 1982. However, at the end of 1982, just prior to the record's release, the group split when Brian Goble left the band to join D.O.A. (2).

They briefly reformed and toured briefly in 1995, and then again in 2005, when Goble, Hannah, and Graham reformed with drummer Jon Card. The group released their first album of new material, "New Dark Age Parade" on Alternative Tentacles in (...)

Lacquer processing company and engineer uncredited, both identified by the matrix numbers.