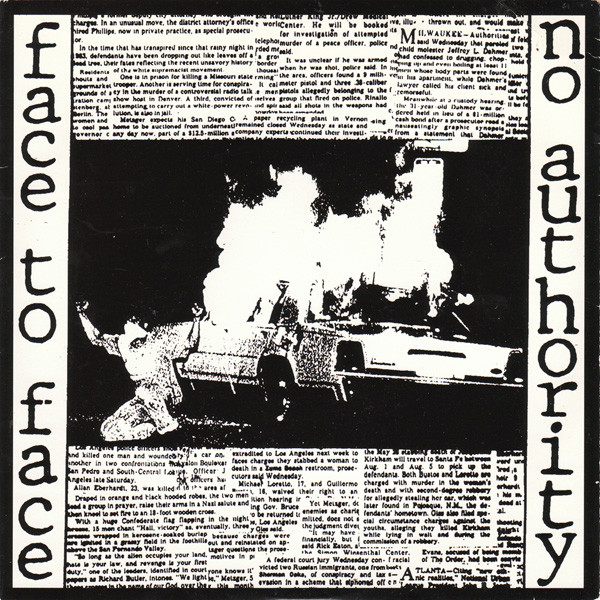 Face to Face was formed in 1991 by front man Trever Keith, bassist Matt Riddle and drummer Rob Kurth. Previously the trio played in a band known as Zero Tolerance (17) along with guitarist Mark Haake. Prior to Zero Tolerance, Trever and Matt played in a band named Victoria Manor, which disbanded in the late 80’s.

Face to Face's first album, Don’t Turn Away, was released in 1992 by Dr. Strange Records, a small independent label located in Alta Loma, California. After nine studio albums and a dedicated following, arguably the band is most well known for their single, "Disconnected," which was released on the band’s first two albums receiving significant airplay on college radio.

During the bands 29-year career, Keith had been the only constant member with many former band members finding success in other bands. Former drummer, Pete Parada is the current drummer for face_to_face_no_authority.zip

4th pressing with car on fire front cover and black borders all around the front cover. Glued sleeve. Dr. Strange Records logo on the back.

Has "RockFace Has Been Appeased" carved into the runouts.