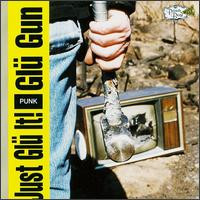 A Californian punk rock band formed in 1991 after vocalist Bob Oedy's former band The Grim split up. After inking a deal with Posh Boy, Glue Gun changed their name to Glü Gun, in order to avoid confusion with the New Jersey band who had already asserted their claim to the Glue Gun name. In 1994, the band managed to release a full-length studio album for the label, Just Glü It, and eventually, they changed their name back to Glue Gun.

In 1995, Glue Gun signed to Fearless Records and released their second album The Scene Is Not For Sale. Although the album sold reasonably well, they got dropped from Fearless and found it hard to find a new label. The band eventually broke up in 1997.

In 2005, Oedy was joined by three Jughead's Revenge members Joey Rimicci (guitars), Brian Priess (bass) and Andy Alverez (drums) under the Glue Gun name. They played a series of one-off shows before consequently parting ways once again in 2006. However, in 2011, Oedy brought Glue Gun back together again, this time with The Scene Is Not for Sale lineup, with plans to play a series of live shows and possibly record a new album.