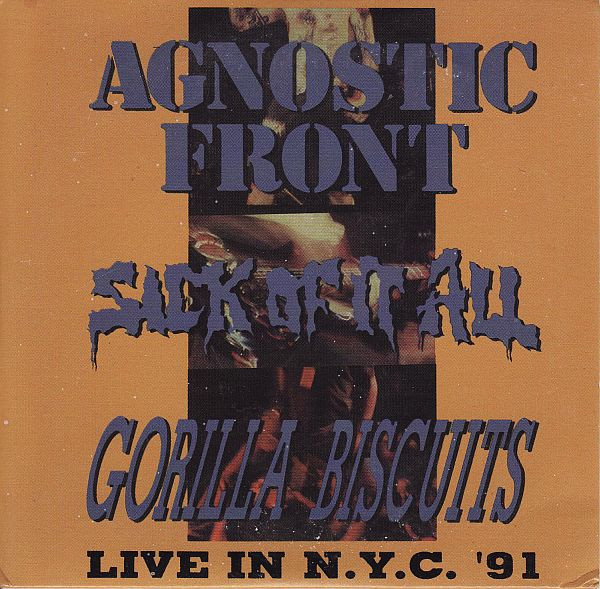 This is a bootleg cd made from the audio of a VHS tape put out by In-Effect records called "Live In N.Y.C. '91"

The last interview track is a collection of out-takes.

AGNOSTIC FRONT, SICK OF IT ALL, GORILLA BISCUITS: Live in NYC '91 video

"In January of 1991, the fourth annual "Superbowl of Hardcore" was held at

The Ritz in New York City. Three of the bands that played, AF, SOIA, and GB

were filmed for this video. You should know that it was done on video and not

film, so don't be expecting grade-A quality from this. The live segments are

solid, good sound, many different angles, fans of the bands will love it.

Plus, you get interviews with members of the above three bands, along with

Nuclear Assault, Cro-Mags, and Murphy's Law talking about everything you ever

wanted to know about hardcore. At fifty-eight minutes, this is a must for any

NYHC fan, not to mention a good introduction for anyone curious about hardcore".


1991CDHardcoreinterviewNon-musicPunkRockSick Of It AllUnited States

The Crucified – The Pillars Of Humanity (1991) CD Album