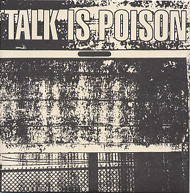 A one-sided 14" x 7" printed insert with lyrics and information is included.