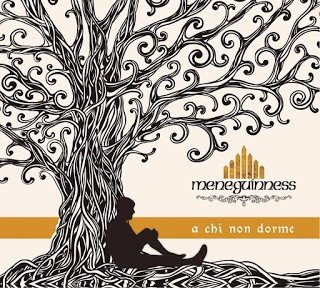 
Jan Imbesi (accordion, piano), Daniele Forcella (vocals, acoustic guitar, harmonica), Davide Bini (drums), Fabio Mantegazza (bass, backing vocals), Mauricio Bisol (fiddle), Lorenzo Sacco (electric guitar) and Fabio Salvalaggio (tin whistle) are Meneguinness, a band from Brugherio (Milan, Italy) that was founded in 2012. Their self-titled debut album was released in 2014 and consisted of a bunch of Irish standards and two covers: “Galway Girl” and “Ring of Fire”. Three videos from that album were posted HERE and now the guys have moved forward and have issued a sophomore album based on their own songwriting: “A chi non dorme”.

Meneguinness sing in their own language and therefore the first band that comes to my mind is Modena City Ramblers.  Their sound is sometimes similar to MCR early years, but the Clash and Mano Negra influences are not so obvious. Besides, on their quieter numbers Meneguinness follow and approach similar to that of Quebec’s finest band Bodh’aktan.

The album begins with “Bergamo”. The intro has a Mexican feel, thanks to the accordion and bass. However, the song turns into a Flogging Molly influenced number showcasing banjo (guest Sergio Pontoriero), fiddle and tin whistle. The last part of the song is 100% Italian accordion music. The video for this song can be watched HERE .

There is no gap between track 1 and track 2, “Titanic (John Ryan’s Polka)”. It’s really a pity that Celtic punk/rock bands always chose the same tune when they record a polka. Nevertheless, Menneguinness deliver a great version and every single instrument has its own place: fiddle, tin whistle, mandolin, electric guitar …

“E’ tardi” is a slower number, but it’s very interesting too. As I’ve previously mentioned, this song reminds me of Bodh’aktan’s quietest moments. The next number is called “Felix Pietro”, a song about the Italian emigration in the XIXth century. I love the upbeat fiddle beginning and the overall epic feel thanks to the accordion. The level goes up with “Pietrino”, a fast paced number with a great end featuring tin whistle and fiddle and one of the hottest numbers together with the opening track and track no. 10.

“Dany del Nord” is a cover of “Donegal Danny”, but Menneguinness have put their own words about a shipwreck. It starts acoustically and little by little drums, accordion, banjo and fiddle join in. The country sounding electric guitar adds something new to the song. Nice cover.

“Crandall Canyon” tells the story of a mining accident that took place in Utah in August 2007. This song is folk-rock at its best: beautiful harmonica and piano first notes, fantastic fiddling, tin whistling and accordion playing, excellent rhythm section and a kick-ass electric guitar again.

The next song is titled “Donna Manager”, a number with an addictive chorus and a badass tin whistle and fiddle tune at the end. It’s followed by a song about the London terrorist attacks in 2005, “Dolce Signora“. Track no. 10 is a song written by the Italian songwriter Massimo Bubola for Italian singer Fiorella Mannoia in 1992: “Il Cielo d’Irlanda” (Ireland’s sky). Brilliant version by Menneguiness, since they have been able to take a top-notch song and arranged it in an updated Celtic rock way. If Modena City Ramblers chose Bob Geldof’s “The Great Song of Indifference”, Menneguinness have chosen another amazing song too, “Il Cielo d’Irlanda” and they have done a great job. That’s the kind of cover that I like to discover in a Celtic rock/punk album. Hats-off guys!

The album is over with a slow ballad, “Buonanotte a chi non dorme”, a song dedicated to our youth. Piano, banjo, fiddle … and an appealing electric guitar work that reminds me of the Christy Moore “Unfinished Revolution” and “Voyage” years.

“A chi non dorme” comes in a six panel digipack. No lyrics are included, but the liner notes have a short explanation about the album concept and comments about every single track. Line-up, guests and studio credits can be found together with contact addresses and a full band pic.

I’m happy; Meneguinness have always been on my radar and I’ve been waiting for this moment. After a full standards/cover album Meneguinness have  released an excellent sophomore album based on their own material. And the final result is spotless. Even if you can’t speak Italian, you’ll enjoy “A chi non dorme”. That’s the power of music, and Menneguinness’s life is music.