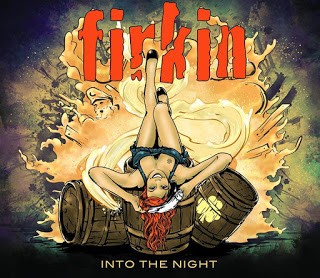 When a singer leaves a band, there is always a risk for the remaining members. Fans could make comparisons and decide that although the band keeps the name, they are not the same band. Firkin’s old singer Barna Marthy left the band and PJ and his mates were obliged to look for a new vocalist. When Andy jumped in, Firkin decided to release an EP, “Revox”, with songs from their previous album, but sung by the new singer.

Another two songs where posted on YouTube and obviously fans and critics alike have welcomed Andy, who is doing a great job. And this is clearer on the band’s latest offering, the “Into the Night” EP.

The EP kicks off with the title track “Into the Night”. Celtic punk at its best, as all the things that have placed Firkin at the forefront of the European scene are there: powerful vocals, top-notch fiddle and tin whistle, a solid rhythm section and a great guitarist.

The next song is titled “Flowers”. It’s based on an Irish song recorded by Altan on their “The Red Crow” album (1990), “The Flower of Magherally”. The song is improved by a kick-ass tin whistle tune.

“Johnny I Hardly Knew Ye” gets the Firkin treatment. The song has been recorded by a lot of bands, included The Tossers and Dropkick Murphys, but Firkin always add something special to their renditions.

The digital version from Amazon has only these tracks, but the digipack physical version has a bonus track: “Focimese”.

“Into the Night” is an amazing EP to whet appetites. But we want more. Come on! Release a full album soon. We love you!

Firkin – Into the Night