Album: Vibing Up The Senile Man (Part One) 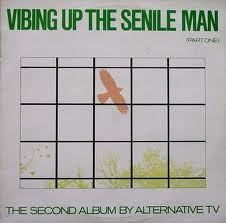 Recorded in 1978 at Pathway Sound Studios.