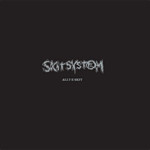 Collection of EPs and splits : Profithysteri, Skitsystem side of Levande Lik / Untitled split 7" and Ondskans Ansikte.
Comes with lyrics sheet.