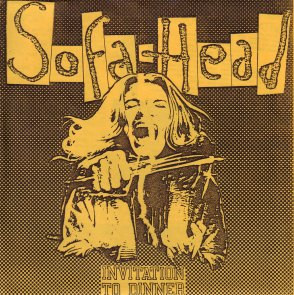 Sofa Head cut 4 albums. "Pre Marital Yodelling (1127 Walnut Ave.)", the title of which is an oblique reference to both Jehovah's Witnesses and Laurel & Hardy. Recorded in July 1989 it was released on Meantime in the UK, on the Double A label in Germany and on the Profane Existence label in the USA. This was followed by a single release "Invitation To Dinner" on the Rugger Bugger Discs label and a John Peel session. This single featured on the 2nd album "What A Predicament".

The band released a 12", titled "Twat!", featuring 2 studio tracks & live tracks on the flipside. Laing left the band and joined "Leatherface", replaced by a drummer called Graham (surname unknown) for the 3rd album "Acres Of Geeses". However, Graham disappeared on the eve of the support tour and Laing filled in, finally being replaced by Matthew Woodward from the Cleveland (...)

Yellow/orange sleeve.. Other colours were available.The sleeve is 1 1/2 folded over, with a further small fold at one side as it is otherwise too wide for the standard 7" poly bag. White labels, stickered on one side (as can be read on Image).

Side A: There's no scratch message on this record
Side B: What's for breakfast?

Image of the sleeve taken from Lucio Fulci´s The Beyond (L'aldilà) movie.