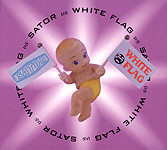 American punk rock band founded in 1982 in Inland Empire, California and based in Los Angeles.

"Made in Germany" (disc, back of cover)