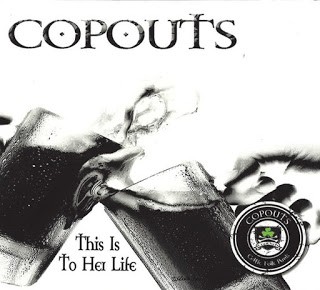 The CopOuts were our Band of the month in November 2015 and one year later we are happy to review the debut album from this five piece band from Vermont. Jay Knecht (vocals, guitar), Jordan Brown (drums), Dan Dodd (bass, vocals) and new members  Matt Bean (fiddle) and Ryan Emerson (lead guitar) have recorded 10 songs where they clearly showcase their love for Ireland. “This is to Her Life” has three standards and several self-penned songs, some on them based on/featuring some traditional tunes.

The album kicks off with the title track “This is to Her Life”, which is an upbeat fiddle led song based on the “Irish Washerwoman” jig. The next track is the CopOut’s rendition of “All for Me Grog”. It gets a live treatment with a lot of 1-2-3 and hey shouts and backing vocals shouting “Tobacco!!!”. When the song goes slower and one tends to think that it’s over, there is a an amazing electric guitar part before the real end.

“Drunk Guy” is a long track, 5:40, but it’s one of the highlights on the album. Brilliant cow punk fiddle and rhythm section can be heard on this song. And there is an electric guitar part too. “Where We Goin’” has a The Dubliners sounding fiddle tune and it’s an enjoyable song.

Track no. 5 is a cover of “Star of the County Down” featuring electric guitar towards the end of the song.

The following song, “Ireland”, is the main anthem on the album and the song that every Celtic punk fan enjoy. Celtic punk at its best with its catchy chorus: “We may not be from Ireland, but the whiskey, beer and soul are deep within.” On the next number Jay has put lyrics to the “Road to Lisdonvarna” reel and the result is excellent, a great song with a British folk-rock twist. Another standout number follows, “Now or Never”, a fast-paced song featuring a traditional fiddle tune.

“Drunken Sailor“ is the third standard on “This is to Her Life”. The CopOuts follow a similar approach to Firkin’s version, that is, an energetic approach.

The album comes to its end with “Out to the Sea”, an interesting song based on the “Little Beggarman” tune.

If you like fiddle, electric guitar, Irish tunes, the American music approach and the live pub atmosphere, The CopOuts “This is to Her Life” will be the right addition to your Celtic punk collection. 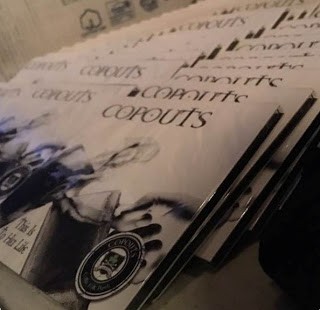