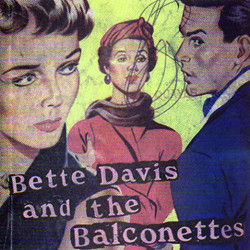 Bette Davis and the Balconettes were Sam, Norwood, Brian, Eugene, and Tracey. When Nor left the band, he waa replaced by Kate. .

The band were a punk rock cacaphony. It's most famous song was "Shergar" (The Wonder Horse). The song was an FF #14 on the John Peel show in '97. "Shergar" was originated by their drummer Norwood as a galloping horsey drumroll ode to early Clint Eastwood's "Rawhide" and morphed instantly into "Shergar" by Sam, the band's vocalist.
The song made it's debut at the Manchester Roadhouse on 7 May '96. Three days before the show, the band plastered Wilbraham Rd with fliers bearing the infamouse horsehead profile of Shergar as used by the IRA amidst great laughter. Three weeks later, the IRA bombed Manchester city centre.