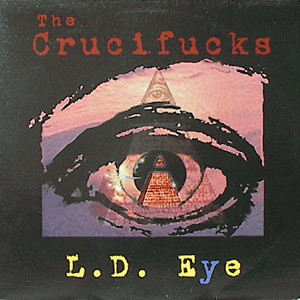 The Crucifucks were a hardcore punk rock band from Lansing, MI, USA, formed in 1981 by vocalist Doc Dart. The group was known for Dart's shrill voice, anti-authoritarian lyrics, and extreme antagonism. Unusual for a participant in the mostly youth-orientated hardcore scene, Dart was 28 years old when the band started. The band's original drummer was Steve Shelly, who eventually ended up as the permanent drummer for Sonic Youth. The Crucifucks first album was recorded by Black Flag producer Spot and released on the Dead Kennedys' label Alternative Tentacles in 1985. The album, featuring songs like "Cops for Fertilizer" and "Hinkley Had a Vision" (referring to would-be presidential assassin John Hinkley) is hailed in some quarters but was later referred to as an "abomination" by Dart. Dart returned with a different line up and a different sound for 1987's "Wisconsin" but the band was done shortly afterwards. In 1990, Dart released a solo album entitled "Patricia" (named after his therapist) on Alternative Tentacles. In 1996, Da (...)