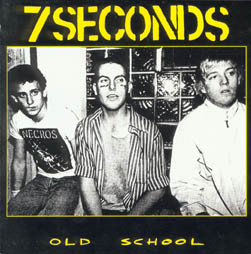 Recorded at Nobs Studio, Reno in March 1983.
This recording was supposed to be put out in 1983 as their first 12" titled "United We Stand" on Alternative Tentacles Records but the release was eventually shelved.

First pressing.
Cover has a glossy surface finish and no 'Printed In Canada' mention on back.
Labels have a large diameter stamper ring around the centerhole.